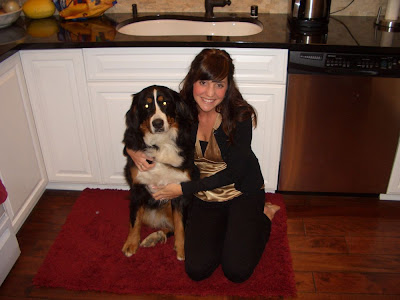 This is Zoe....isn't she the cutest, fluffiest thing you ever saw??? Thankfully, my sister's amazing in- laws took her and love her so much too.

It’s been hard to find dogs here-well, scratch that-to find good dogs here. Street dogs are about as common as a hot day, and so are their sad little puppies. We’d take one of those little guys, except they grow up to be pretty small. We want a big and feroscious looking dog. Our main reason you may ask? Security. We only have a cactus fence here so all you need to get through is a machette, which 90% of people walk around with one-including many women.

After months of no luck in Haiti, we were tried Florida. It was going to be too pricey and we didn’t like not seeing the dog before we bought it. Ah. So finally we decided we’d look in the Dominican while we were there. The first few days we had a few leads, but they fizzeled out to nothing. When we went back through the large city of Santo Domingo on our anniversary trip, and we tried one last time… and found a sweet little Rottwieler.  And that is when the journey home began.

We weren’t ten minutes at the bus station before some cranky old man came up to us and told us no dogs were allowed on the bus. He was causing a scene, talking loudly through his three good teeth. He didn’t even work for the bus company! So we took the dog out of the waiting area, and sat in the diesel fumes of the buses, way in the corner of the station,  to avoid any problems. We anxiously waited two hours for our bus. We kept debating if we should keep him in the carrier, or fold it down and sneak him in a bag. We were both stressing out big time, knowing if we couldn’t get him on the bus we either had to ditch him or take a very, very expensive taxi ride to Haiti. Meanwhile, the poor dog had yacked twice already. We thought we lost the old man, but soon found him talking to a bus driver. Turns out he was our driver and he was ratting us out! Oh if my Spanish was better he would have had a mouthful from me! Brandon approached the driver and learned it was company policy to have no pets on the bus. Brandon joked with him and reminded him how he has seen and heard plenty of chickens on the buses before. The driver laughed, and said as long as he didn’t see the dog, we’d be fine. He was actually a really nice guy, and he pulled the bus to the far corner where we were, let us board and slide the crate and dog under the very back seat.  He then drove to the front and let the rest of the passengers on. Whew! Thankfully, some yahoo young kid sat right in front of us with a cell phone on speaker phone blaring rap music for almost three hours-no one could hear the dog whine or yack three more times. It was a long ride. We then stopped in another big city, and had two more hours to go. We just might make it. We got to the border town of Dajabon about an hour before sunset. As we made the three block walk from the bus station to the border we noticed it looked pretty quiet. Unusually quiet. We were so distracted and worried about getting the puppy on the bus, in the bus, and across the border that we forgot to check what time it closed-and they close early on Sundays!!! We missed it by two hours. We stood there, shocked and dejected.  We were stuck in Dajabon, with a dog. I guess I should have seen this coming when our last night in the hotel I lamented to Brandon how I wasn’t ready to go back to Haiti- I guess I should have been more specific! Well, a nice border policeman told us there were a few hotels nearby and even offered to drive us to one. Exhausted, we took him up on it. He pulled up to a small establishment, that looked pretty well kept. But let’s just say I would not have stayed there if it were not the fact that we were in an unknown town, at dusk, with a dog, any no other options. We made our way up the stairs to our room. It was about the size of a king bed, with a full bed stuffed in it. It was clean though, and had a large bathroom we could put the puppy. Brandon washed the vomit off the dog and we left him in the bathroom while we went to find the only food we’d eaten all day. Turns out the hotel made great fajitas, and we quickly ate them and returned to our room. The dog had gone all over the bathroom. Poor thing. No one slept good that night, and we set off as soon as we could for the border.

The tricky part now was going to be getting the dog across. Since there are really very limited rules in Haiti, and all rules are subject to change at any time for any reason, we didn’t know what to expect. Dogs are allowed, but we’ve heard some people paying a lot to get them in. We’ve heard others having to wait weeks for ‘correct paper work’ and others who’ve had no problems at all. Brandon and I usually go with the ‘act like you know what your doing’ bit and it works most days. But, after seeing the attention the crate got right away, we knew we needed a plan B. There are guys at the border who will take your stuff across in a wheel barrow so we flagged one down. We put the crate on the bottom and all our three bags on top. You couldn’t even see him! He didn’t make a noise, but it didn’t really matter since Mondays are open border days and it’s like the wild wild west out there. You have to push and shove your way across, holding all your belongings close, as you inch your way to the other side. We took a deep breath and just marched right across, paid our fees, got our stamps, and took him straight to the truck. Another two hour ride, one more yack, and we were all home safely. WHEW. 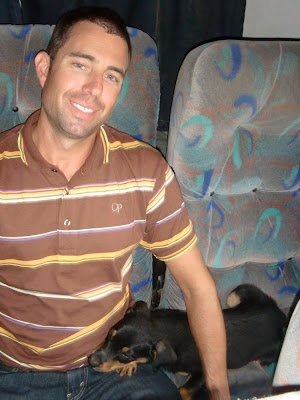 Brandon couldn't make him sit in that small crate any longer....how cute are they? 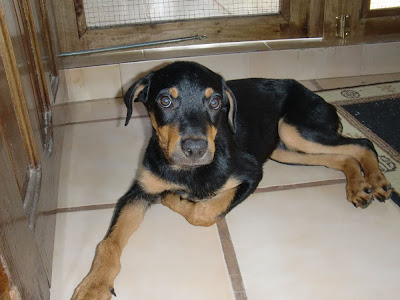