We are here. Both of us. Together. In one piece, safe and sound.

It was certainly an experience getting here, I’ll tell you that much. It kinda started a few days ago, when we were packing. Even though we did this three years ago, I think I forgot how intense and stressful it can be. Not because it’s hard to do per say, but more like the process of packing, shopping, re-packing, weighing bags, stuffing more things into already full bags, is-well-exhausting. And the bigger issue is that I’m pregnant, and therefore ‘nesting’. A term when I first told Brandon about a few months back he laughed out loud, crinkled his brow, and said, “but you aren’t a bird!” Oh these boys. Of course he did look it up. And while he was quick to point out there is no technical definition, he did concede that it is in fact a very real thing that pregnant women can experience. I have been warning him too-that this nesting will manifest itself in different ways-since we have been homeless for a little bit. I mean really, how do you nest a home you don’t have??

One such manifestation was seen in the eight checked bags we had. Eight. You are allowed five each, so I thought we were doing pretty good being two shy of our limit! Now, I know what most of you are thinking, they were all mine. Wrong. Well, sort of. Brandon did have three bags of his own. One was his clothes, the other misc, and the last one? You guessed it-his surfboards. All Brandon cared about was getting his surfboards there in one piece. All I could think about was where will we be living and how will I make it feel like home? And so I managed to stuff all sorts of things in those 5 bags that will help me to make a nest for us. Things like cute curtains, smelly candles, all my favorite kitchen gadgets, yummy smelly soaps, aprons, a few decorations for the living room we don’t have yet. Ya know, to make a lovely little nest.

So when we pulled up at the LAX airport, we were a freak show from the beginning. We could barely manage those bags with two carts. We rolled ourselves up to the self check it. Then we were detoured to the desk. Then sent back to the kiosk. All the meanwhile I am getting some serious stares at my belly as we haul our crap all around the check in area. We lose almost an hour, and finally we end up with these two not so happy to see us-with-all-our-bags- ladies. But it was perfect. God knew what He was doing. The first bag we threw up there was 5 pounds over and she wanted $100. She barked at me to move 5 pounds to another bag, and I just had to laugh out loud knowing each bag was already brimming. My plan was to actually start giving people around me my precious belonging, like my favorite candles that weigh about 2 lbs each. I turned it over, unzipped, resigned to loose a few precious things, and the AA lady actually conceded. She told me to just put it over in the pile! Maybe it was then that she saw my belly and had a little mercy on me. They were so annoyed with us and our stuff and holding up the line, that they ignored bag after bag that was a few pounds over the limit.  So it actually worked out to our advantage! With that stressful event behind us, we went upstairs to encounter TSA.

A few words on TSA, since I have your attention. Apparently Brandon and I have a distain for them that we both share, one of which is so apparent to others but somehow we didn’t see it until recently. I guess it comes with flying a lot? Some don’t mind the strip search, cavity check, and blood sample thinking they are kept safer in the process. Others of us just want to poke them in the eye sometimes. This time I was strip searched because I opted out of the new scanner-standy-thingie. (Don’t get me started on that thing!) I opted out for obvious reasons( like I’m pregnant and they don’t know what harmful effects it may have on us humans a few years from now) but they still stand there and yell “we have an opt out” and purposefully make you wait a long time so you’ll reconsider next time you think you want to ‘opt out’… So I was patted down and tested positive for explosive substances. I just laughed. The lady looked at me like ‘oh no my friend, this ain’t no joke’. I was taken to another area and searched again. Hmmm. After all that they decided I was okay, and said it could have been my lotion that set it off. Right, so lotion is used for making bombs these days? We made it to our gate with time to pee and that was it. Yikes.

The good news? We got away with only having to pay for three extra bags because the fee to bump to business class was less than the fee for extra luggage and we got another free checked bag being in business. Man, that is the way to fly. More good news, we go the airport and since we were the last flight of the night, everyone just wanted to go home, and customs didn’t check one of our bags. Not one. We heard we could have ended up paying a decent chunk of change for all the crap we brought it, so it felt like another huge blessing in the midst of a crazy day. We stepped outside in an unfamiliar place with bags piled high and immediately saw two LWI guys, Stu and Les, who were there to greet us with hugs and smiles. We were so happy to see them. Another answer to prayer. We had a smooth and safe drive to the LWI guesthouse, and immediately went to bed. And sitting here writing about yesterday makes me just as tired all over again!

Today we slept in, sweet Stu took us for a tour of downtown Leon,where we stopped at the grocery store. I about died, we both did. We found treasure we never could scrap up in Port de Paix or Cap Haitian in Haiti- things like apples, broccoli, tortillas, fabric softener, (I finally took mine out of one checked bag after many assurances from Brandon that we really would find some in Nicaragua)-whole wheat bread. Did you hear me? Whole wheat bread, seriously. You Haiti friends, don’t hate! Stu thought we were nuts to be so excited about a tiny grocery store, telling us the ones in Managua are much larger. What else could I need? Guess what else was there??? Turkeys!! AND Christmas trees and lights! (More items I didn’t pack while Brandon had to re-assure me that a Latin culture would have some Christmas decorations) Later we went to the beach for some food, sun, and so the boys could surf. Stu actually came to Haiti a few months back to do some drilling in Port au Prince and drove up to meet Brandon and see and Cap Haitian. They actually went searching for surf in Haiti, and found some tiny waves one hot day. And now Stu is returning the favor, taking a fellow surfer out to show him all the best places to surf… Brandon couldn’t be happier. And me, I get to sit on a quiet lovely beach and read a book.

Well, I’m off to bed. But not before I show you a few photos. What would the day be without me documenting it with pictures?? 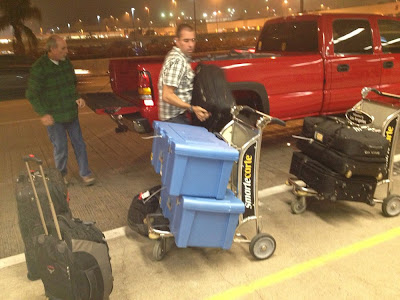 Bran and dad hard at work un-loading the truck while I didn’t help, and instead took pictures!! 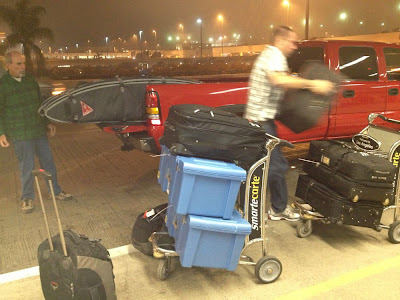 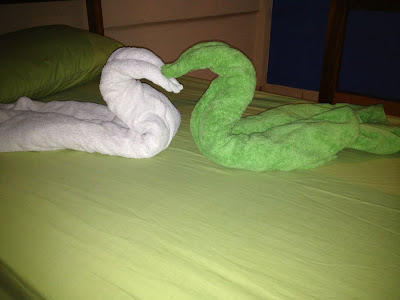 This was waiting on our bed! I mean really, I was already in love with the ladies who take care of the guesthouse, just seeing the way the welcomed us with those cute swans, a very clean room, and already made up bed. What a pleasant surprise! 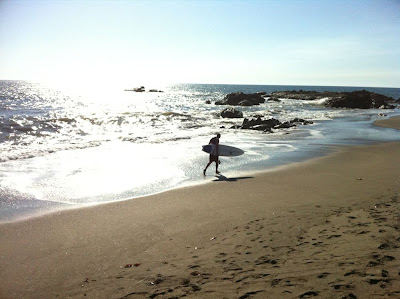 The beautiful beach we visited today, just 15 minutes from where the LWI guesthouse is. Brandon is off to catch some waves, and you can’t see it, but there is a grin on that handsome face!