Brandon and I have been married for seven years, and have moved 9 times. I think it’s a sickness. Some moves were little-like the time we lived in an apartment in Carlsbad, and the one next door vacated. Most normal people would have preferred to not move, considering we had just moved in one month before, but we did. The new place was cheaper, newer, had a washer and dryer and bigger back yard. So, my ingenious husband literally removed the fence in between us and we walked all our stuff from one apartment to the next! The easiest move by far.

The most difficult move? Yesterday. As we were packing our things on an old beat Toyota, the realization came to me that we are moving across Haiti. We really are nuts. We had one truck that nwhcm was generously letting us use, but there was no way all our stuff would fit. I thought we could go Haitian and pile everything high and tie it together, but even that wasn’t going to work. We decided to pay a gross sum to rent a beat Toyota, so we could have two small trucks. It was way cheaper to do that, than to rent a large truck, plus we liked the idea of a caravan for safety. The plan was to leave Monday, but Brandon got a nasty case of “Haitian sensation” on Sunday, and we were out late with our OTB staff and friends the night before. I forced him to go to the party we had for our staff, and thankfully he felt much better once we got there. We had so much fun! It did take 2 hours after we ordered to get our food-a real “made to order” kind of place. You can almost hear the chickens screaming in the back a few minutes after you order.

We decided to post pone the move to Tuesday.  I think one of the best parts about waiting was we got to see more friends before we left. In addition, Curtis and Danielle (our friends from La Baie) came down to visit. They came with a group on Sunday, and stayed with us for two whole days! It was so fun! Well, I don’t know about fun for them, but it was so nice to visit and hang out with them. They helped us pack, the boys played tetras trying to get everything perfectly fit in the truck, Danielle and I hung out, cleaned, organized and packed. 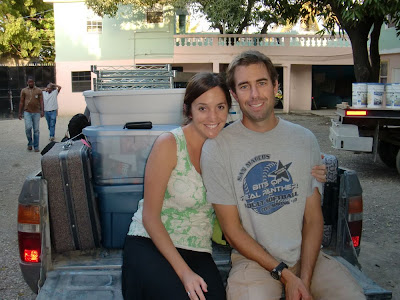 We left Port de Paix at 6:30 am. By God’s grace we had four Haitian guys that we knew who came with us. One was Edril, who is our kitchen manager, but is also sweet friend. We had three more staff that we know and love, which made the ride not only more enjoyable, but we felt even safer knowing these guys would have our back if anything happened. Almost everyone got to sit inside the cab, a few guys had to switch off sitting in the back on top of our stuff, which was not very pleasant for them, and they got so dusty! It was nice to not worry about anyone grabbing our stuff as we drove by cause they were sitting right there. The road the first half of the trip was terrible, dirty and dusty with huge pot holes. The second half was paved, but still with huge potholes. It was a bit scarier when you start getting speed only to discover a hole at the last minute and he has to quickly tap the breaks or swerves to avoid it. yikes. Everyone made it, not one thing was lost, broken or stolen.

~3 people squished in each cab

~1 encounter with police. Praying the entire time, they thankfully only asked a few questions, and our guys had all the right papers, so they let us on by.