A simple word, but one that conjures up all sorts of delightful images and ideas. Who doesn’t like to recieve a package in the mail? In this particular case, even when you know what most of the contents are, it is still so great! We moved straight from Port de Paix to Cap Haitian,without going back to the states,  and didn’t take a whole with us. There were still a few things we needed from back home, and so we began a pile. Or rather, I should say Brandon’s sweet parents began collecting all sorts of random things we left behind that we now wanted. Dress up clothes for church, work boots, capris (now I don’t have to wear skirts everyday!!!) We made a few orders online and had them sent to their house. Then, they carefully wrapped and packaged everything up for us, took it to Fed Ex and had it sent to Florida. From there it boarded a plane that took it directly to Cap Haitian. Door to door, the whole process  took only about two weeks! Pretty amazing if you ask me.

The nerve racking part came when we went to go pick it up at customs. We had no idea if boxes would arrive in one piece, if they would even be there, or what we might have to pay for customs. Several people had told us it depended on the mood of the guys that day- if they had slept well, eaten good that morning, etc, on how much they would charge you. We went to pick it up and after waiting a while, I was thinking, ‘oh man they are lost’ and they showed up with the two boxes! Six guys came out of nowhere, set the box on the table, and opened it up. They looked like they wanted to rip everything open, and after they took the first few things out, the main guys stood up. He looked at us and said, “take your boxes and go” !! We got out of there so fast, before he could change his mind! We didn’t have to pay a dime, which we chalked up as an act of God. 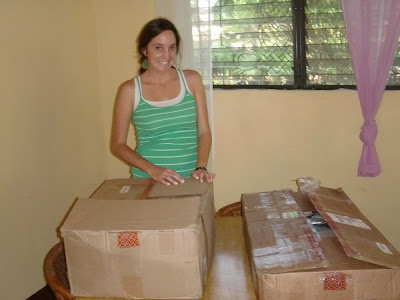 We drove straight home, and had our own little package opening party!