I never thought I’d be driving up and down the streets of Cap Haitian looking for heavy machinery. As we have noticed in our short tenure in Haiti, there are very few tractors, large equipment, cranes, etc here. You don’t notice until you need to, and then you just can’t seem to find one. We have only seen two here, and both times we pulled over immediately to talk with the operators. I know, strange. But we had seven containers(full of supplies we need to repair pumps)  that needed to be moved from the house we are in now, to the new place.

Plan A? Get a crane. Crane ’em up, load ’em onto a semi truck, drive to the next place. Repeat. Perhaps one day, maybe two.

Plan B? Find a semi truck. Then unload all contents from the containers, and watch in agonizing pain as the semi attempts to lift and scrape the empty container onto his truck (don’t ask me how, cause I can’t even imagine how this would have been done!) Then drive to new house, unload contents in the middle of the yard. Then get a truck and make several trips with all the stuff to the new house, then load that back into the container. A nightmare right? Yes.

Thankfully, the Lord provided. He hooked us up with a nice Haitian who has one of the only two cranes in all of Cap Haitian. We called him endlessly and he finally relented and agreed to help us out. Of course we were paying him, but still he is so busy-being the only guy with such a machine-he had a waiting list.

We busted it out in one day. I started the venture off by recoding and taking photos-until I about had a heart attack-so I went inside the house. The first container he lifted went fine, until he went to set it down and I looked at the crane and it was about 8 inches off the ground. I turned to Brandon to confirm that this in fact was not normal, and his face told me-no it was not normal. And this was the lightest container we had!! 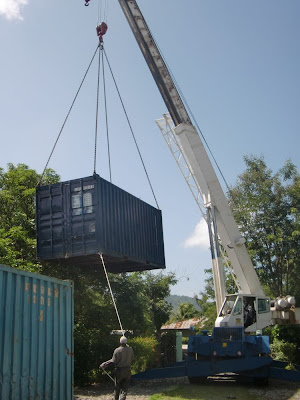 The first container being moved-and guided by two guys with ropes! 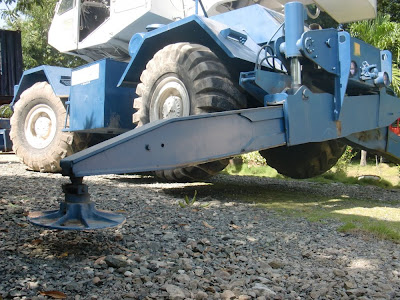 Yes, he was catching air. I took my photo and slowly backed away... 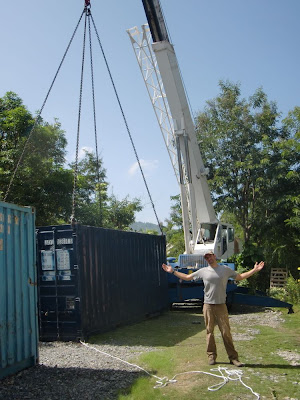 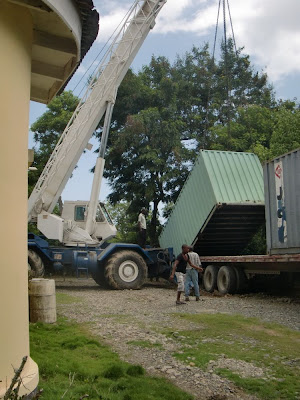 This one was so heavy they had to lean it up onto the bed and reverse the truck underneath it.

Another huge hurdle was getting the semi’s in and out of the houses. The first semi truck driver couldn’t do it at the first house, so the second semi did it for him. At the new house was similar, not as bad, but we did take out our neighbors cactus fences. Oh they didn’t mind one bit, just asked for some money and they replanted them the next day! 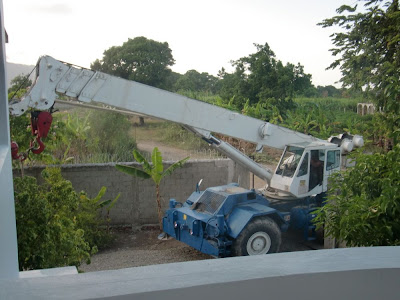 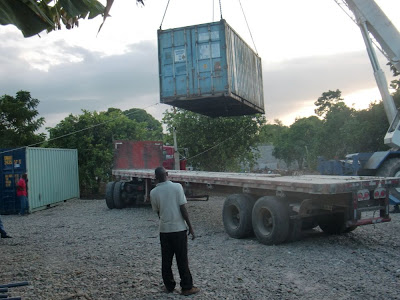 Dropping at the new house. The truck is trying to back out while the crane holds the container above him. Yikes. 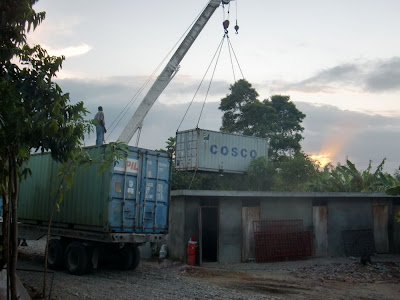 The last container flying through the air, just as the sun was setting.

Only ten hours, but we both aged a few days. We are so thankful it’s over. God provided the men, the trucks, the resources, and kept everyone safe during the process. I’d call that a success.

2 thoughts on “One big crane.”