Strange how disconnected you feel from life when you have no access to the internet. It was nice for the first day, not worrying about checking email and getting work done. But three days later I found myself turning on my computer only to realize there isn’t a whole lot to use it for when you don’t have internet-unless of course you’re in school, and thankfully those days are over.

We are officially all moved in. We have running water, power, electricity, internet…the whole shabang! We’ve now spent four nights in the new place. I have to admit something, now that we are moved in, I have actually been dreading this move. And the underlying reason? Simply, the change. I normally love change, look forward to it, thrive off of it-and so does Brandon. Except for some reason, I was dreading moving into this new house. I think it was a combination of things: a new neighborhood with new new people, the house was super dark and creepy, and a few other reasons.

So, after having moved in and been here only a few days,  I am rather pleased to report that the new house is much better than I thought it would be! We are just getting to know the neighbors, the house looks amazing with paint all over it, and we have tons of fruit trees and amazing lushness outside our place. I already have a few favorite spots and I will show you later. Three Haitian guys worked non stop for an entire month making all the bars for the house-36 windows,and 7 doors- and this is them hanging them up. They did such an amazing job!! (And yes, that is fresh paint on the outside too!!) 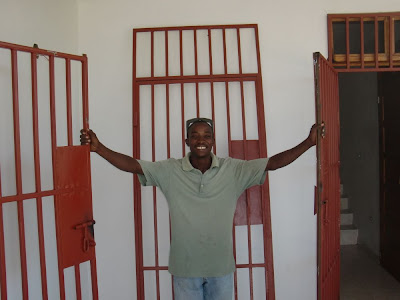 This is Nasso-the boss-who worked so hard, was very sweet, and always had a smile on his face! 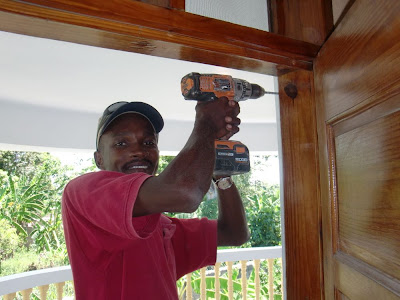 This guy was pretty quiet, but did a great job.

So, I have been having way too much fun mixing paint! I used to love painting, until I painted our old house in Fallbrook, all 1600 square feet, two coats, all by myself. It did look amazing when it was done, but it was a ton of work. This house has been so much work too, but the fun part has been mixing fun colors, and seeing the amazing instant results But, sometimes I do get a bit carried away. For example, I painted all the bathrooms yellow, just to keep things simple. But, I didn’t love the yellow in the downstairs baths, so I lightened it a bit for upstairs. Then, after I mixed a great green aqua color for another room, I decided I wanted that in the bathroom instead! So, I compromised and just did two walls the fun green. It was kind of like back tracking, but well worth it! 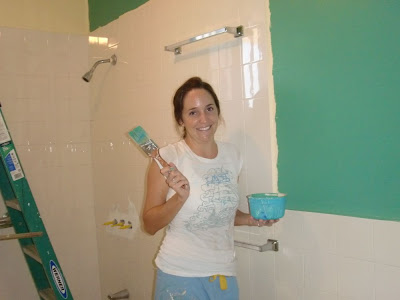 5 thoughts on “Back in touch with the world.”