There are mice/rats/creepy things living here. Since no one lived here for a long time, the place was very overgrown and because of that, many crawly things have been living here without anything to kill them.

To battle this we did two things:

1. Bought a cat. We don’t like cats-sorry you cat freaks- but they are great for killing mice and rodents. This cat is a bit wild, or rather a lot wild. We’ve had her now since the day we moved in, and are hoping she’ll do her job! For now, we’re just giving her all sorts of tasty food so she won’t run away. By the way, turns out Todd is the cat whisper. He cracked me up with his skills! He loves cats, so we’ve been so thankful for his help with her the last few days! It was his idea to lock her in a room and feed her tons so she knows where to go for food, he made her a litter box and she used it right away, he started petting her and loving on her which amazed me because she hissed at anything and everything before that! Anyway, I hope she’ll get to eating some mice!

2. We got sticky traps. The old fashioned sling back ones are not easy to find, so we just bought what we could. We set them up two days before we moved in, hoping to take care of the mouse problem before we set up residence. We came back the next day and checked all the traps.. and would you know we had two finding! One had some hair in it-obvously the rat was too big to get stuck. The other one had something stuck to it alright, but it was no rodent. It was the biggest spider we ever saw. Ever. Ever, ever, ever. I actually started gagging and tears were rolling down my eyes ( I thought of you Melissa and Casey-how you guys have such a terrible gag reflex that everyone finds hilarious when in fact you yourselves hate it-and for once I realized how you felt! How you can’t even control it and you just keep gagging while Todd and Brandon were cracking up!!) It wasn’t just the size of this beast, but the girth. We’ve seen-and I have personally killed-spiders as larger as him, but they were much thinner. This one was so huge that I actually looked Brandon straight in the face and told him I don’t want to move here! He and Todd hardly noticed my ramblings as they picked it up to get a closer inspection. Turns out, it wasn’t dead, it was just stuck! So here Todd is holding the thing, it started to move a few legs, he freaked out and tossed it in the air and I started gagging again! I wish I would have never seen that awful movie, Aracnaphobia, all those years ago. Even though we didn’t sleep at the new house that night, it was hard to fall asleep! 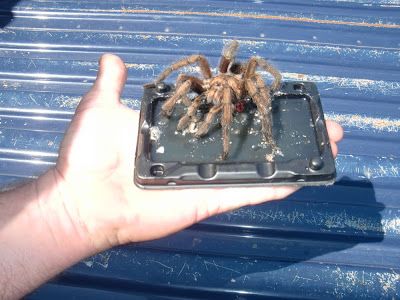 There is Todd's hand so you can see just how big he is. 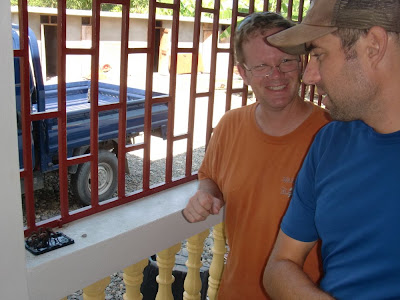 Todd and Brandon went in for a closer look-while I stayed away. 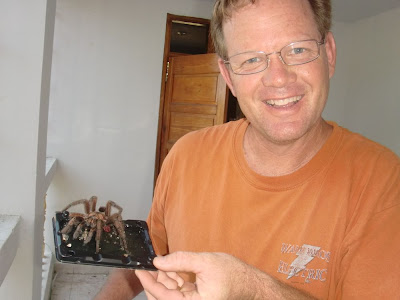 I'm not sure what freaks me out more in this photo- the spider or the fact that Todd has a huge smile on his face!!