My husband (as my sweet mother-in-laws tells me) was always a curious child. He was the kid that would continue doing something, even after you told him ‘no’ just to find out what might happen. He was that kid in the doctors office who opens each and every drawer, pulls out the stethoscope and listens to his heart and his mom’s, and plays with all the instruments lying out. He was the child that looked at every little gadget and toy very closely to figure out exactly what it did. Somethings don’t change. We have gone to the doctors many times together in our married life, and he still gets caught red handed playing with some contraption when the doctor walks in-which totally embarrass me because it seems excusable when your under ten-but he doesn’t mind. And when he,or anyone else, buys a new car it’s not about taking the car out for a test drive, it’s about checking out all the knobs, drawers, buttons, and gadgets.

Well, a drill rig comes with lots of knobs, hoses, big and little machines, drill bits, parts and such. And therefore, Brandon is in heaven. The first time I came down to check out the progress, I caught him investigating every nook and cranny. He articulated that they had to get to know each other-him and the rig that is- before he could take her for a test drive. He is both adorable and hilarious!! 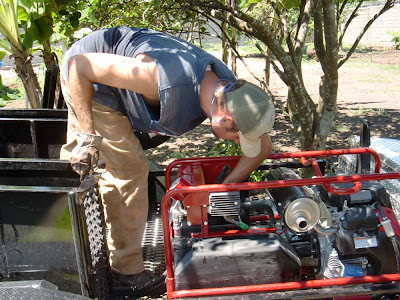 Checking out the engine... 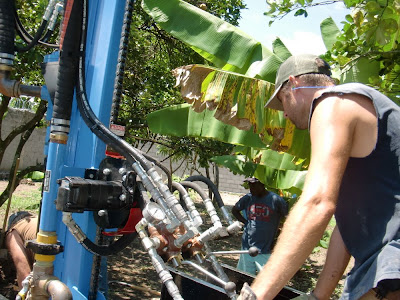 Oh ya, check out all those knobs and levers!

So, all last week was drilling. Jim flew down here, from Michigan,to train Brandon in how to use the new drill rig. And I did I mention how it is that we happen to have a brand new drill rig? Well, let me tell you. A church- rather  three churches in one- raised the money for the entire thing! This church is passionate about water. So passionate, that they created their own non-profit just to raise money for the global water crisis. And they give money to many different organizations, that bring clean water the thirsty all over the world. And God connected that church with Living Water, and the rest is His story… Go ahead and read all about it for yourself…. http://www.liquidwater.com/.

It might sound a little selfish, but we did drill the first well right here where we live. This was for a few reasons. Primarily,  we wanted to make sure everything worked before we took it out into a community. There would be nothing worse than heading out to a community to drill, and the rig doesn’t even work! (and we are happy to report everything on the rig worked great!) And secondly, what kind of water organization would we be if we don’t even have clean water in our own place? (yes, we use bottled water to brush our teeth).

And so let the fun begin. Even though I am a girl, I still like to put on my tough girl hat and join the boys sometimes too.  But it didn’t take long to see what a hard and muddy job it was, so I was content to stand on the sidelines and document. Did you know drilling is loud? I didn’t. I couldn’t really ask my normal million questions along the way, which left me slightly confused in the process. So I will relate what I found out thus far:

Drilling is dirty. I mean, I know we have a mud rotary drill rig, so I imagined there would be lots of mud, but there was lots and lots and lots of mud. Having a mud rotary drill rig means that we use mud to break up the ground beneath us to get to the water. Some rigs use air, like the one in Port au Prince, ours uses mud. To get started, you have to dig two huge pits, that are used to make mud. 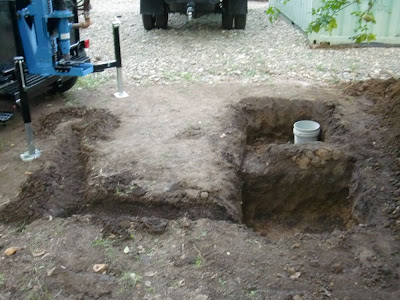 The two large holes for mud

Then, they filled those holes with water. 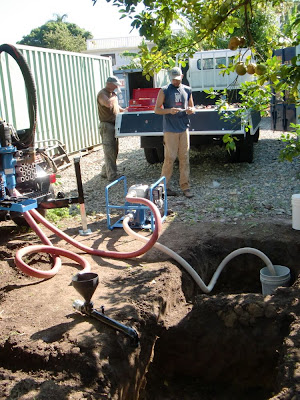 The two holes with pumps running into them-one to fill it with water, and one set up to pump water back through the rig to be pushed down the hole. 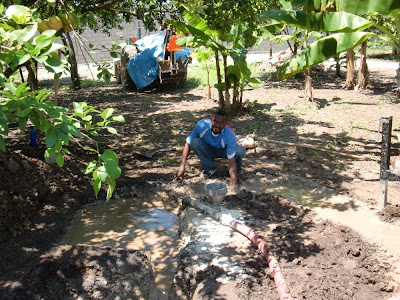 Ivenor helping to mix the special dust like stuff called (bentanite?) with the water to make perfect mud! 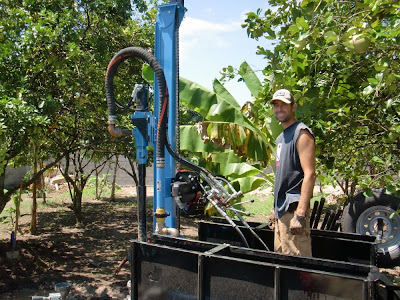 Brandon on the rig.

So they got the hole drilled. They were hoping to get down to about 100 feet, but things weren’t looking real good that deep,and they pulled back to a shallower aquifer instead.  After you drill a hole, you have to put casing down it. Casing is like the ‘outer pipe’ that protects the walls of the well, and has a screen at the bottom to help filter out rocks and stuff. In addition to tiny pebbles that are packed around the screen to help with that too. (and a few more things that I am pry forgetting!) And, in keeping with consistency, we did have a few minor set backs. As they went to put the casing down, it wouldn’t go all the way. We think that the hole collapsed a little the night before, since we had a huge rain storm. Thankfully, it was only an inconvenience and not a major problem. But first they had to pull out all the casing, and measure it to find out how deep the blockage was. then they put the drill bits back on the rig, dug through the blockage.  and then proceeded to put the casing down the hole. 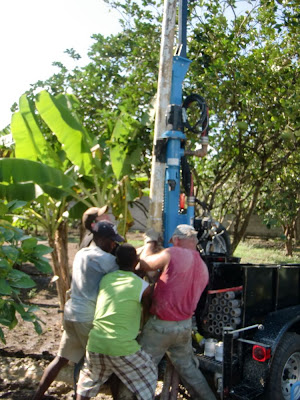 Everyone helping to pull the casing back out of the hole. 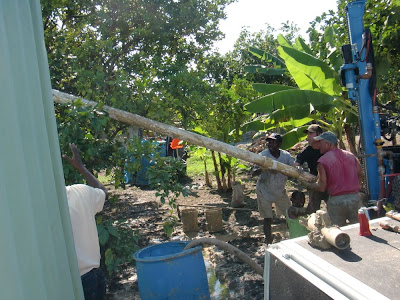 Then pulling it out of the hole and laying on the ground... 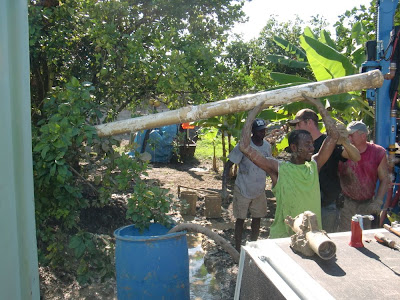 Ivenor right there, in all the mud, helping out. 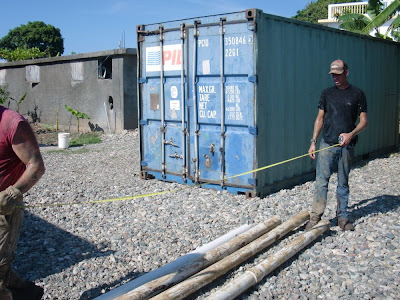 They had to measure out the casing to see how deep the blockage was... 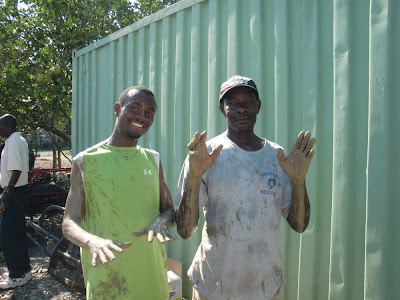 It's a dirty job!! Ivenor and Claymont got so dirty helping out!! 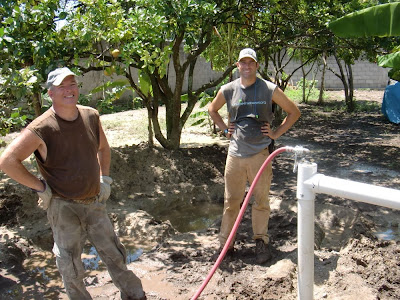 Jim and Brandon finishing up all the loose ends... 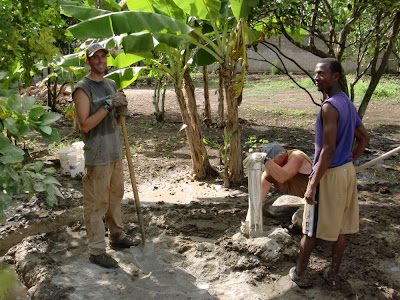 The last step is to pour concrete down the hole to make sure nothing on the surface can contaminate the well.

There is way more to explain, but that is the gist for now. As I learn, I’ll post more. That and I’ll try and convince Brandon to post details too! Either way, it’s sufficient to know we have a brand new well! We need to put in all the piping to get it up to the roof in our gravity fed cistern, and after that, we’ll have clean water flowing through the house… and that is exciting!!!

7 thoughts on “Our first well.”