Who doesn’t love to explore a new place?

Okay, sometimes it can be frustrating when you can’t figure out where you are going, that is in fact very true. Especially when your handy dandy phone doesn’t work because there are no street names/signs, etc. We do have a GPS, but I am the worst navigator ever. I try to find excuses as to why I suck at this very important job, but all I can come up with is I was not wired to read maps. So that leaves my poor husband with the job of driving new roads, reading the map, not hitting pedestrians and obeying all new laws that he hasn’t learned yet. What’s my job you may wonder? Other front seat driver. This position is actually sanctioned by Brandon himself, only for when driving in a foreign country though, specifically the third world- For the betterment of our marriage, this position doesn’t exist in the US of A-for the safety and well being of ourselves, it’s a real title and important job in the third world. My job duties include: notifying him if he is A. about to hit a person or object, B. if he’s going the wrong way on a one way street (there are lots of them here, and not clearly labeled!!) C. Packing water and snacks. Since my husband is so task oriented that he would starve or thirst himself for an entire day , he does appreciate the snacks I come with, and is usually willing to overlook my navigating deficiencies when I keep him fed and happy.

But it’s fun to get out and see what there is to see. So far we have had just a little time to do that, not tons, but enough to make us excited about what fun places there are for us to discover! Our time is not our own because we started Spanish school last week(dramatic sigh). I feel like a rebellious teenager as I complain and trudge along for four hours of one on one Spanish, five days a week. It’s torture. Of course I’m loving that maybe perhaps I’ll be fluent, someday in the future, sooner than later if I can get through this. And to be honest, there is more motivation knowing we’ll be able to speak this language in other countries. I mean come on, what on earth are we going to do with all that learned Creole in our heads? For now, it just rolls of the tongue so naturally I don’t even know I’m speaking it and not Spanish. Until, that is, the person I think I’m speaking Spanish to looks at me like…??

Anyway, I took some pictures of Leon so you could see the area a bit. We are only a little over a mile from downtown, so we walk there to go explore. That, and we don’t have our own car yet (we are borrowing the LWI trucks when they are not in use) so we also walk to Spanish school. It’s easier to get familiar with the area on foot, so we are enjoying it. That, and it’s not too crazy hot yet, usually high 80’s every day, so walking is a sweaty endeavor but not miserable.

Today we went to Chinandega, a town about 30 minutes Northwest of us. It was pretty cute. We didn’t have tons of time, so we just made it to the beach (to check the surf for Brandon) and a grocery store (for me of course)  that we heard was better than ours in Leon. Who knew finding new grocery stores could be so exciting? This was was pretty great, but ours is nice too. This one had a few items the other did not, and that was fun. I even found bagels, chocolate chips, and a few other surprising finds.I can’t even begin to tell you how exciting it is to have a grocery store, a few in fact, packed with just about everything a woman could want!!

Oh, and lunch? We found a yummy pizza place. Yes, pizza. Turns out Nicaraguans love pizza-hello, we instantly have something in common! There are pizza place everywhere, now this is my kind of place. 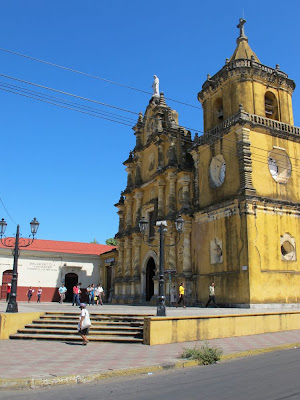 One of the many old Catholic churches in downtown Leon 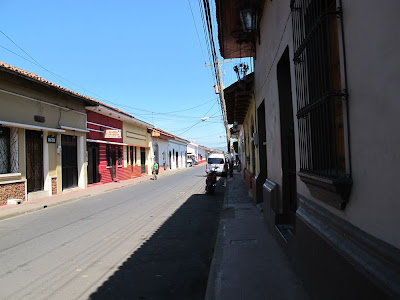 A typical looking street, along our way from school to home. 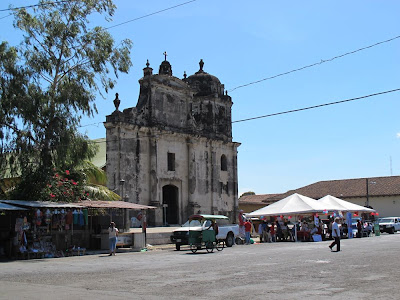 Another Catholic church- I don’t know the history of this one-I’ll get back to you! 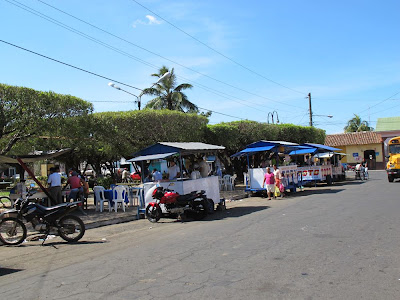 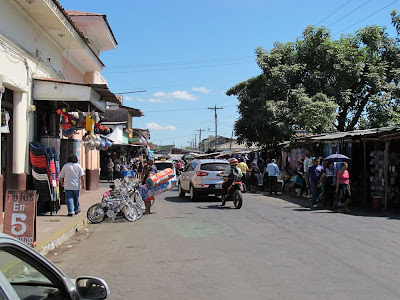 Lots of outdoor markets, vendors, booths selling a little of this and that. I did find the mothership too-an old building that had booth after booth of all sorts of things. We walked around through it, it was amazing. I can’t wait to go back and get some things. Except when we got close to the fish stall, I almost lost it. Yikes, the smells really get to me these days!! 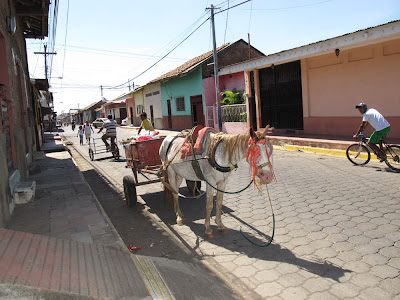 Yup, these guys are everywhere, carrying loads all around town. And lots of people ride bikes-usually two or three per bike-it’s impressive. 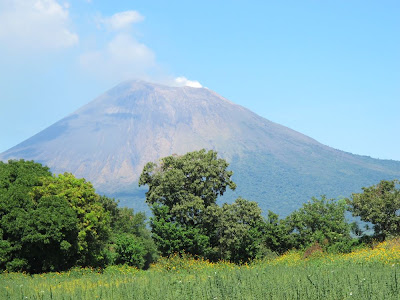 The beautiful volcano just outside of Chinandega- Volcan San Cristobal-Casita 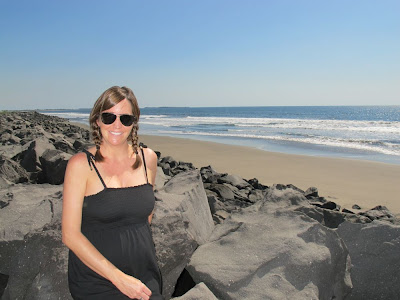 One beach just outside of Leon-no surf that day for Brandon. But it’s quiet and beautiful! 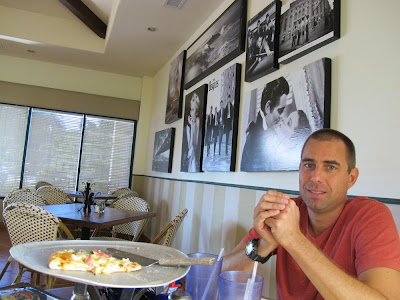 At this swanky little pizza place. Cheap and tasty too!