The next week, Brandon’s dad came to visit, and it was super fun to hang out with all of us. We wanted to show them Nicaragua, and they were ready to get out and see the sights! Since we’ve only been here about five months, we still are pretty new to everything as well. So it was fun for us to get out and see some things for the first time as well. This included a day trip to Selva Negra 0a beautiful forest and coffee plantation up in the mountains, and then a trip to one of Nicaragua’s many volcanos, we took them downtown in Leon and showed them the old churches and buildings, we did a tour of the old Rum Factory,we went to the beach near by, and also spent our last day together at a different beach just south of Managua. We were able to do so much because Eliana is such a trooper-she was perfectly happy hanging out in the car and on the road, as some places we went were almost three hours away! We had such a great visit with Grandma and Grandpa-the time just flew by! 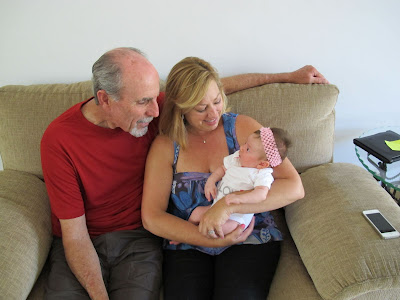 It was so special to have them both come and visit-to love on our sweet Eliana. I cherished the sweet moments like these, watching them both play with her, love on her, sing to her, and enjoy her-what a treat to have family come and visit!!

We went to Selva Negra-the Black Jungle-and it was amazing. It’s about 2.5 hours away from us, and it might as well be a different country! It was about 20 degrees cooler, had large forest trees, and is home to these creepy monkeys called “howler monkeys”. They howl howl. Close your eyes and imagine the low growl of a tiger/lion. And that is the sound they make. No lie. We tried to get it on video but it didn’t work too well. Mom was all about it-she wanted to go and see her some monkeys! I however, have realized over the years, I in fact do not like monkey (the last time I was on an island with them in India it totally creeped me out!) Dad and Brandon took off for a more serious hike,so I humored mom and we went on this little trail through the jungle to try and find these monkey. We had no luck at first, much to her disappointment and my relief. Until about halfway in, all alone, we hear them. And it sounded like it was right above us. It was so loud and so creepy, mom actually clenched my arm and hid behind me and Eliana! ha! Mom says, “they are wild animals, what if they attack us?” I couldn’t help but laugh, yes of course they could attack us, we aren’t at the zoo with nets around us! We spotted one way up in the trees, and the sound freaked us both out enough to get the heck out of there.

This was outside this really old church made of stone. There were tons of trails to take and explore too…

The next day we went down to Masaya, and drove up to see the volcano there. It’s supposedly the most easily accessable volcano in the world-made for lazy people-you can just drive right up to it! And since this mama is way out of shape and not ready to do hiking without any shade and a baby attached to me, it was just perfect! We drove right up to the top, and got a lecture on how we can only stand there for 10 minutes. I guess the fumes/chemicals/sulfur is so strong, that they don’t let you stay up there very long. The volcano was amazing. Unfortunately, all that gas means smoke and we couldn’t see as much as we would have liked. But it was so cool. I couldn’t help but smile to myself, as I thought about how cool God is. I mean, He is so creative. Why make a volcano? What is that there for? It’s a huge mountain with hot hot stuff in it that sometimes spews out. This volcano actually erupted about a year ago, and visitors had to wear hard hats for a while. Hmmm. No hard hats that day, but it was still kinda crazy knowing it could just start raining rocks or lava!

Our last day mom and dad took us to this beautiful hotel right on the ocean! It was close to Managua, where they were going to be flying out of, so we went down on their last day and had a lovely time together hanging out on the beach soaking up the rays. It was so pretty right on the water, and our hotel was really nice. It was odd since it was in the middle of no where-literally a 40 minute drive down a dirt road led us to this hotel and some swanky houses. We didn’t care, we just hung out by the pool and ate yummy food. And yet it was a bittersweet, since it was our last day together. Driving them to the airport the next morning was hard, it sucks saying goodbye. But, what a wonderful time we had with them, and we’re so so thankful they made the trip out here to meet Eliana and see where we live. We are thankful for them, for family, and so thankful for modern technology that makes living so far apart a little more bearable.

One thought on “Grandpa and Grandma visit”