It’s six in the morning.

Why WOULDN’T you be setting off fireworks?

We moved here in November, and thought there were gun shots all the time. Until we learned it was all based on a Holiday called La Griteria. In December. That meant, every single day for a month before and after the 7th of December, people fired off fireworks at all hours of the day and night. No lie.

And what does that have to do with August? Basically back in 1947 the bishop in Leon advised citizens to organize “Griteria de Penitencia” to thank the virgin Maria because Cerro Negro, the volcano, was spewing ash but never really erupted. The local people here in Leon celebrate it much the same way as they do La Griteria, by setting up little alters to Maria,going house to house to visit these alters and pray and sing to her, and the owners of the house pass out presents.  Which is actually super fun and interesting!Oh ya, and of course, lighting fireworks. A few days before to practice ( I guess?) that day at noon, six and midnight, and the next few days when they inevitably have some left over.

Normally I would love to walk around and check this out. I do love learning about new traditions and holidays, and to go out and be a part of them. However, fireworks in the hands of just anybody freaks me out- or gives me the’ heebie jeebies’ s Chandler on Friends would say about the Lord of the Dance,  “because their legs flail about as if disconnected from their bodies”

That, and Brandon was out of town, so  there was no way in heck I was going to wander the streets with Eliana while kids lit up the streets! The next day, like any good party, there was remnants of the fun. So I snapped a quick picture while Eliana and I went for a walk. You know me, I want you to visualize. 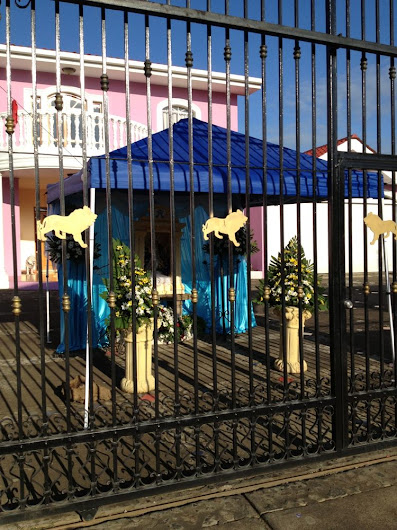 And yes, the house is baby pink.

This is one of the better ones. Big, huge, legit. They open up the gates and put out chairs for the celebration.

One thought on “Heebie Jeebies.”