This was the truck we took to deliver the food. My mom wanted a photo by it so my brother could see all the mud caked on the sides since he likes to off road. Well, mom has come to realize that each and every ride in Haiti is off roading, and her poor body has come to realize that it’s not as fun when you are sitting in the back on a wooden bench! So, from now on she’s been more willing to sit in the front, in the cab, in a normal seat. It’s still is very bumpy there too though! 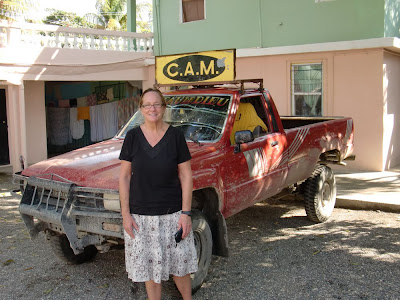 That truck made it across the river too, to deliver food. The water did come up past the bumper though! 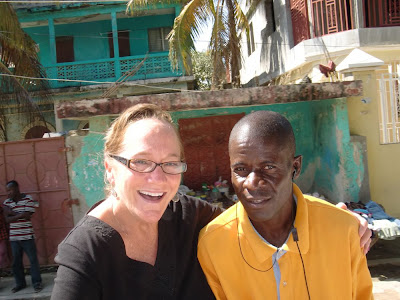 Mom and her new friend Lami. (he works for OTB)

In fact, my proudest moment of Lami was about two months ago. We had just hired him on the recommendation of our kitchen manager, Edril. We weren’t sure if OTB needed more staff, besides the two cooks. He had been working a few weeks for free, trying to show us what a great worker he was, since he really wanted a job. He helped the women load up the buckets, he went out with the distribution of the food to help off load the buckets, and helped wash them when they got back. I trusted what Edril suggested, but that hot day in December really sealed the deal for me. We were crawling along in the downtown area of Port of Paix, halfway done with dropping the food off. The back of the truck was mixed with full and empty buckets. (We make each organization give us the old buckets before we give them the new ones with food in them, otherwise they disappear cause everyone in this country needs a bucket!!!) We were stopped for whatever reason and as we started to go again, some guy walking buy stuck his hand in the back of the truck and grabbed a bucket. I was sitting in the back too, but too far to reach him or do anything about it. But, Lami was there. He grabbed the other side of the bucket. We started to move again, as the driver didn’t see what was going on, and there was Lami, standing up yanking the other side of the bucket as this guy walked alongside the truck. Finally, Lami grabbed another empty bucket with his free hand and whacked the guy on the head with it! I was so happy I cheered for him! The stunned guy stopped and scowled at us, mad he didn’t get a sweet clean bucket. And Lami sat down with a huge grin on his face. I already liked Lami, and that moment he dug even deeper into my heart. 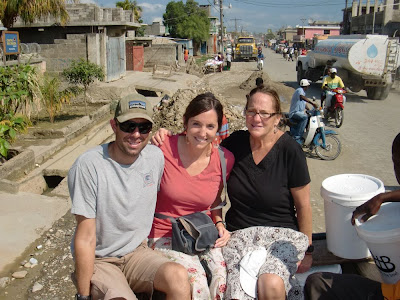 On the back of the truck distributing the food 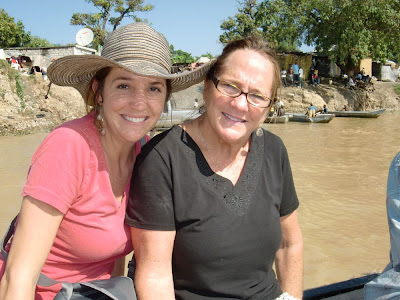 Crossing the river. Mom was shocked we could drive in that deep of water.