You know the term. It’s a nicer, more hip way of saying “she’s a hippie girl”. It’s a little less radical than a hippie, but a little more grass roots than your regular gal who enjoys eating and shopping organic simply cause it’s trendy. I’m not trying to find my classification, but rather had to give you some background for the last few activities I found myself doing. I couldn’t help but laugh at myself, never thinking, ever, that I would be not just living in Haiti but being one of  those’ girls-making my own granola, yogurt, and bread!!! Part of me is proud, the other part scared that next week I’ll be knitting my own clothes. HA!

On Friday morning, I decided to make granola. I have had a few friends who have made their own, but usually when people from southern california made anything homemade that you can buy in the store, it’s because they want you to know they are just that amazing. Yes, I am guilty of doing this at times! But now, I have to make everything from scratch, and I am embracing this new chapter. While it’s a lot of work, I love knowing that just about anything can be made right in your own kitchen!! I should say I attempted to make granola cause, well, it was not successful! After about thirty minutes of prep, I put it the oven. It’s supposed to cook for about two hours. After stirring the granola every 15 minutes for two hours, it still wasn’t crunchy. Nor was two hours after that. By midnight, I was done watching, waiting, stirring…and decided it was a failed venture. Even though I was so bummed, I kept laughing at myself as I kept thinking how ‘granola’ I felt, making my own granola!! I have yet to talk with the woman who gave me the recipe, but I still am unsure if it was user error or recipe error. Either way, I am not deterred!!

The next day, I made yogurt. I didn’t even know you could make yogurt from scratch! Seeing as how we have no access to anything dairy other than margarine-not even butter-it really limits the things I can make. And, since I can only stuff my carry on with so many cold and frozen goods (which are pretty much gone by now) , we often just miss out on delightful things like cream cheese, sour cream, yogurt, cheese, etc.I’m proud to say, it turned out simply wonderful!! After the whole granola debacle, I was very thankful for a success.

Sunday I made bread. Now, bread eludes me. Yeast and I do not get along. I have ruined countless loafs trying to make it in a bread machine!, and since I couldn’t make bread in a bread machine -where all you do is pour in a package and make a hole for the yeast-then there was no way I could make it from scratch. But, our friends from La Baie came over to visit, and I asked her to help me. She has lived in Haiti for almost four years, and so, without having a choice, she “is so granola”. I love it. She knows how to make things from nothing. She even knows how to make pancakes from srcatch… I didn’t know you make ’em without a mix!!!! So, she came willing to help me along. It was much better than just following a recipe, cause she could show me all the tricks and tips. It was so fun making it with her, making bread, and it turned out so wonderful. It sounds silly, but now we can enjoy simple things with bread that we couldn’t before-toast, sandwiches..it’s the little things!! 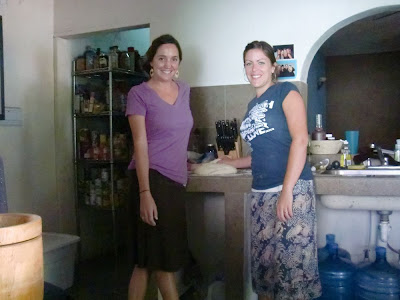 Kneading the dough-turns out it's a good workout! 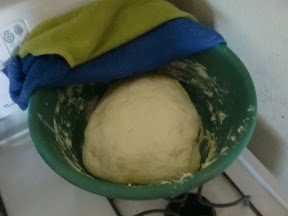 Right when we you're done kneading.. you have to let it rise.... 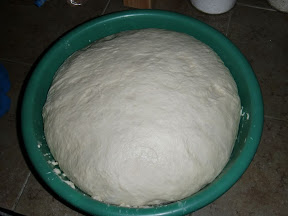 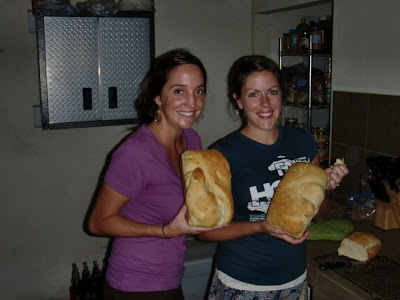 It turned out p.e.r.f.e.c.t.!! Thanks to Danielle, I couldn't have done it without her!!