It’s sad saying goodbye to visitors, especially ones like Todd. He’s so laid back, such a great help, and super fun to be around. Poor guy had to put up with us for two whole weeks though! He came to do electrical work-which he did and did an amazing job-but also helped with so many other things too. The interesting part is he helped us moved into our old place in Port de Paix, and somehow came just in time to help us move into this new place. It was so nice to have an extra pair of hands around though! At the last place he had to put together his bed, this place he helped Brandon put together our couch. The last place he did all the electrical for the OTB kitchen, this place he put together our generator, batteries, then hung a billion lights and fans. We did give him a break though… on Sunday we took him to the private island we discovered months ago with our dear friends Curtis and Danielle-he of course loved it-and we had a great day relaxing. He really wanted to go and see the citadel, because it’s amazing, but we were running out of time. Seeing the citadel was pretty much the only thing he asked to do, and so how could we not make it happen? But, having just moved into the new house, Brandon and I felt like we had too much unpacking and work to do to take off another day. The solution? We asked a Haitian friend, Claynel, to take him. We didn’t know if he would want to go without us, but when he found out that going with just him and Claynel meant that he could ride a motorcycle up to the top, he was ready to go! Being the good friends that we are, we packed him some snacks and water and sent him on his way. I know, it sounds awful but Claynel has been to the citadel about 50 times with groups, so he knows his way around pretty well. And, he’s a super good and trust worthy guy so we knew he was in good hands. 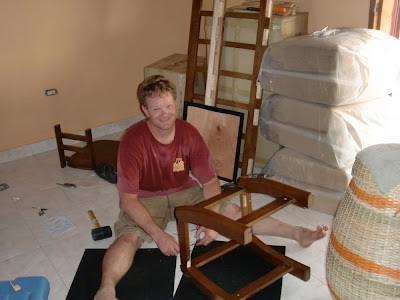 Doesn't he look so excited?? Poor guy.. thinking he came to do electrical and here he is putting together the couch! 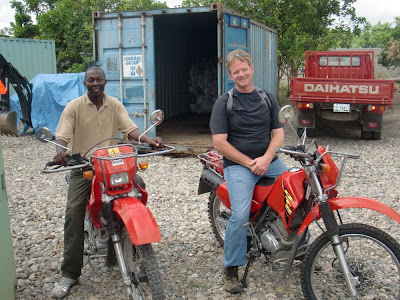 But a day on a motorcycle made up for it! 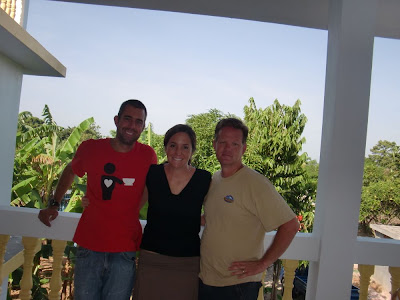 Sad day, saying good bye to a great guy, and a fun visitor.

It was great to have him. It’s always nice to have visitors, and especially familiar faces too. Todd loves Haiti, even when we lived in dusty Port de Paix where our neighbors burned trashed three times a day on all sides of us, when we had to ride tap taps everywhere, where we had power just a few odd hours during they day and night, when our house was all concrete with no breeze and see through screen walls,  and we had hardly any fresh food at all. After all that, he still loved it and came back to visit! So he really appreciated all the new luxuries we have now like fresh squeezed juice, and electricity almost all the time, and our own vehicle to ride in with air conditioning!!, and the beautiful balconies with a lovely breeze…and on and on the list goes. I will tell you one thing, we are so thankful we started in a place like Port de Paix in the exact place we were in, because it has made us really enjoy and appreciate all the newest luxurious that much more.

One thought on “Goodbye Todd.”