I think one of my favorite things that we did with the group from Liquid Church was go for a walk. This was no ordinary walk through the country. As I told you before, this church/school was in need of clean water. They were getting water to drink from a hand dug well in the back of the property. Can you picture this? It’s a fairly wide hole, just big enough for someone to dig down into. Then they put cement around it and create an opening. If they are vigilant, they keep a door on it when not in use. And when they use it, they have a 5 gallon bucket tied to a string. They throw the bucket into the hole and pull the string up slowly. This means every single time someone gets water the string and bucket contact the water. The same string and bucket that were sitting on the ground, that animals walk on, flies land on, and the person using it doesn’t wash their hands before or after using it. In addition to the fact that most hand dug wells are only 5-15ft deep. Thus, contaminants from the surface can easily seep into the water. Needless to say, there are many ways in which an open hand dug well can get contaminated and why it’s not safe to drink. So we took a walk to the other place people from the community get water, another hand pump.

This pump was about .70 miles away. A little less than a mile. About 1km. Doesn’t sound very far does it? It takes about fifteen minutes to get there if your walking casually. But what about if you were holding something? Perhaps a five gallon bucket. Sure it’s empty on the way there, no big deal. But the way back?

I can hardly lift a five gallon bucket when it’s full. I’ve had to, and it’s hard. Let alone walk 20 minutes holding it. And women here will grab that bucket, place a towel/rag/leaves on their head and balance it all the way home. Are you kidding me? These women are studs. They have neck muscles that rival football players. But it isn’t just women, children will help too. I’ve seen kids start helping mom as early as five years old. They start with one gallon.

One gallon of water weighs 8 pounds.

For those of you who have kids, try a little experiment. Any of them close to age 5, 6, 7? The next time you go for a walk together, see if they wanna bring along something that weighs almost 9 pounds. And see if they can carry it for twenty minutes without stopping or complaining.

When kids get bigger, they get to carry bigger buckets of water. (Although a strange phenomenon which I have thus to figure out is this: It seems that boys stop helping collect water at about age 14 or 15. I can’t figure it out. At this age, it seems like all of society has deemed them worthy to stop being helpful, and they can now join the ranks of other Haitian men who sit around and play dominos while the women do all the work. I know, I sound like a raging feminist, but ask anyone who lives here and they can validate the truth in this statement!)

Back to my point, I took the team for a walk so they could see just how far away the closet pump was-the closest source of clean water. And when we got to the pump, wouldn’t you know it, we found some children collecting water. There was one boy who was 11yrs old. He was responsible for collecting and carrying back a five gallon bucket of water for his family that day. Of course the team was shocked that this boy could carry that bucket. Period. Let alone all the way back to his house. So one guy from our group asked if he could help him carry his bucket of water. The look on his face was priceless. He grinned and whispered, “oui”. So Jeff started out carrying the bucket like most of Americans would. With one hand holding it as your body awkwardly tries to balance itself. 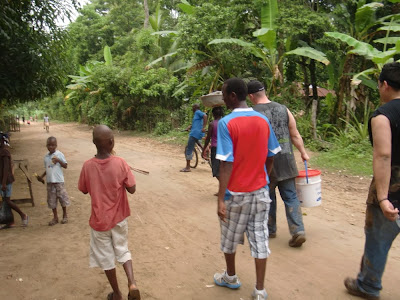 Jeff, who volunteered to carry the bucket... 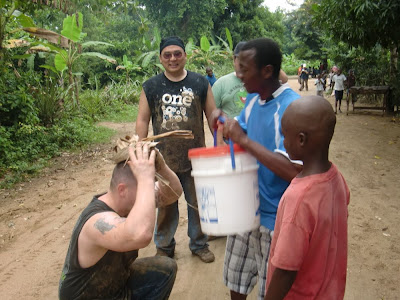 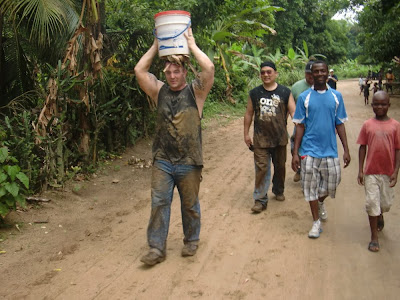 He starts off steady. With both hands up to balance the water sloshing around. Only to find that both arms up is exhausting (even with those guns!) and goes Haitian-one hand up for balance-rotating arms. 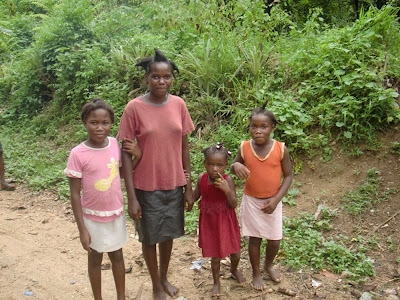 These girls were hilarious. They couldn't believe us white folk were out for a walk, and that one of us would be carrying water! And the kicker, a MAN was carrying water. In my short tenure in Haiti, I have seen only about a dozen times, a grown man caring water. Ever. 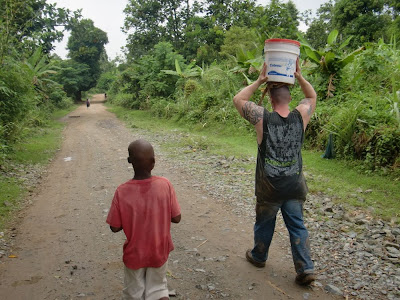 By far my favorite: watching the Haitian boy watch Jeff carry his bucket all the way to his house. 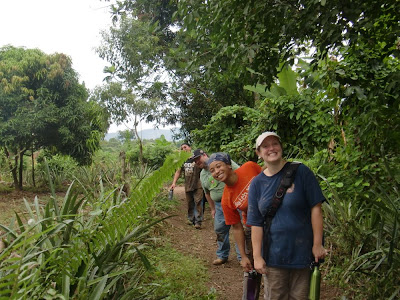 Rebecca, Celina, and both Toms came along for the adventure too-over the hills and through the woods-his house was back from the main road.

It took us about twenty minutes to get to this boys house. And the look on his mama’s face was a mix of shock and humor as she saw five ‘blancs’ stomping up to her house, and one of them carrying water for her son. She laughed as I explained to her what we were doing. But when I told her we were drilling a new well at the school/church, her whole demenour changed. She said, ‘that is where my son goes to school. And that pump will be much closer to my house.”  (We didn’t recognize her son only because he had changed out of his uniform to play and collect water). We asked if she goes to the church, and she said sometimes. She then told us how thankful she was we were there to drill a new well. It was a total cheesy warm your heart moment. But truth be told, my sometimes jaded heart needs those moments, needs to hear mom (who I know is among the poorest if her child goes to the school for the families who can’t afford national school) say a simple, ‘meci anmpil’. A heartfelt thank you, as she looks us in the eyes, is enough to remind me of why we are here. That, and now that the closer pump to her house is in a church, maybe, just maybe, she’ll start going there more regularly- and not just to collect water.