We are programed to think everything works out in the end. That is why most movies wrap up nicely within two hours, and the ones that don’t leave us feeling some serious angst. Well, at least that is how I feel. I love when movies wrap up and everyone has their ‘and they lived happily ever after’.  But unfortunately, that is not life. I have found the only way to deal with that reality, is knowing that God is in charge. Our time here on earth is but a vapor, a mist. (James 4:13)

After drilling in Pistere for nearly three weeks, one with the team from Colorado, we have drilled two dry holes. We quickly got to 80 feet (I’m talking in a half day) and the other 120 feet took us much much longer. We hit some hard formations, and couldn’t get through them quickly. What we needed was a bigger rig, a better rig for drilling through that material. But the funny thing about underground is, you don’t know whats there until you start drilling through it. The last 120 feet went very slowly, and some days it took us over an hour to go down just five feet. But we knew we couldn’t stop. We told the community of Pistere that we would do our best and try our hardest.

Does that make us feel better? Not really.

The last day, when we reached 200 feet -the farthest depth we could go because we only have enough drill stem to go 200ft- it was anti-climatic. We were hoping and praying that something would change and we’d be find water, that maybe it was just down a little bit further. But, in fact, it was not. And so we had to pull all the pipe out of the ground, and talk with everyone from the community.  When we started, we were very careful not to promise anything, knowing that only God knows what is beneath us and if we’re going to hit water. But that still doesn’t help. It was hard to look those people in the eye-those men and women we have come to know- and tell them we couldn’t find them clean water. They were disappointed, of course, who wouldn’t be. However, one man told us that he was thankful we tried. He said he saw how long we there, saw how hard the staff worked, saw how committed we were to trying and trying, and he said thank you.

A sincere thank you goes a long way. It didn’t make our parting of ways easier, but we mutually believe in a big God. One that has plans and a future for the people in that community far greater and bigger than we will see or understand. 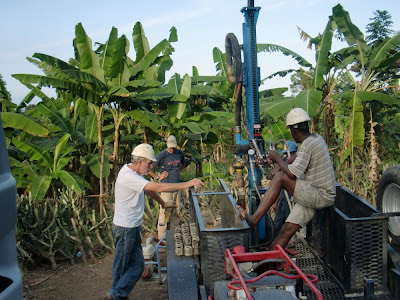 Dad checking to see how many pipe are in the hole, Brandon wondering if we're ever going to find water, and a super nice guy from the community helping out too! 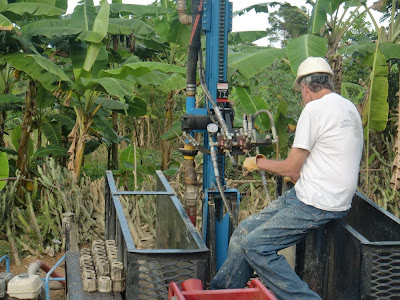 Dad took a turn with the controls. Mom and me took a break from drilling to supervise. It's tough work, but someone has to do it. 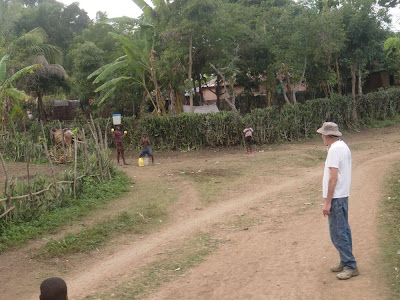 During one of the rather slow hours of drilling, dad wondered off to check out a man who was building his home. (And those kids were posing in the background...I thought I was being sly but they saw my camera and posed too !) 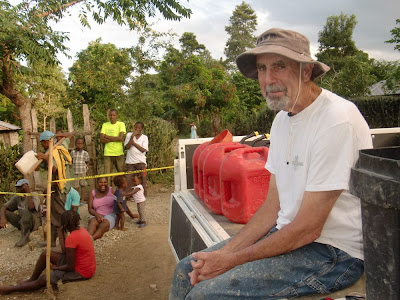 Lots of sitting around as we slowly went deeper and deeper. We still had a decent crowd watching though!